Our research partners Kentucky Equine Research did a great article on Bone Adaptation in Growing Foals.

Mechanical loading strengthens bone during growth. Therefore, exercise during childhood and adolescence has been shown to have lifelong benefits on skeletal health in humans. Similarly, exercised foals show greater bone size and strength. In addition, they show resistance to bending and torsional distortion, compared to pasture-exercised control foals.1

Because the fetlock joint must withstand incredible forces, high-performance horses often sustain injuries at this site. The joint connects the long and short pastern bones. Also known as the first and second phalanx.

A recent study of sound Standardbred foals characterized how the long pastern bone adapts to changing loads during growth. The study used regular computed tomography (CT) scans during the first year of life. In addition to measuring strength and composition changes in the bone, researchers calculated strain energy density, a biomechanical metric of potential bone remodeling.2 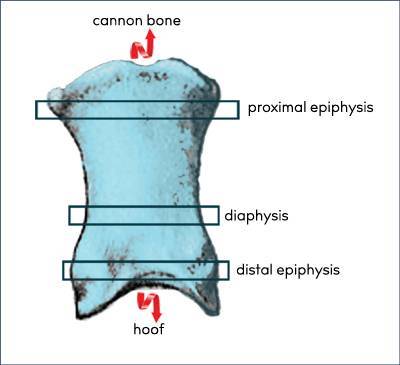 Growth-related changes in mineral density and bone area at various bone points (distal epiphysis, mid-diaphysis, and proximal epiphysis) were assessed. These three points were further divided into four functional quadrants (dorsal, medial, lateral, palmar). Mineral density and bone area uniformly increased in the diaphysis and a portion of the proximal epiphysis, the medial quadrant, but not in the fracture-prone lateral quadrant. Strain energy density was constant during growth, indicating bone adaptation to standing quietly, the primary activity of Standardbred foals, according to prior observation by researchers, which revealed that foals between the ages of two and five months spent 80% of their time at a standstill.

In sum, “the work provides a baseline longitudinal characterization of normal remodeling of the equine forelimb first phalanx during the first year of life and its effect of strain energy density,” the researchers explained. “This is an essential prerequisite to making evidence-based recommendations for training regimens that may encourage bone growth in areas prone to fracture during development. A properly prepared musculoskeletal system may lead to fewer fractures, thus reducing the unnecessary wastage of equine athletes.”

In addition to exercise, proper nutrition of the mare throughout gestation and of the foal during all growth phases fosters future soundness. “Nutritional management of young horses starts with an appropriate, good-quality forage. Fortified concentrates can then be fed to meet energy, mineral, and vitamin shortfalls,” said Catherine Whitehouse, M.S., a nutrition advisor at Kentucky Equine Research.

What OBS Feed is best for Foals?

OBS Feeds have all been researched and tested with the KER team. Gest-o-Lac has the optimal nutritional requirements for the full growth and development of young horses.

“Aside from hay and concentrates, supplements designed to increase bone health can be used to support young athletes. Triacton, a supplemented formulated by Kentucky Equine Research, contains a novel source of calcium and an array of bone-building nutrients designed to increase bone density, with the ultimate goal of promoting long-term soundness,” she explained. “Research in weanlings, for example, showed that Triacton had a positive effect on the density of the cannon bone.”